You are interested in this walking dinosaur? Here are some information for you.

This is a part of an exhibition titled Amazing Dinosaurs Art Exhibition.

It took place in Tokyo, Japan in December 2020.

18 dinosaurs were on display at the exhibition. There were ten-minutes moving dinosaurs shows once an hour, and I was thrilled by the Tyrannosaurus as you have seen in the movie. 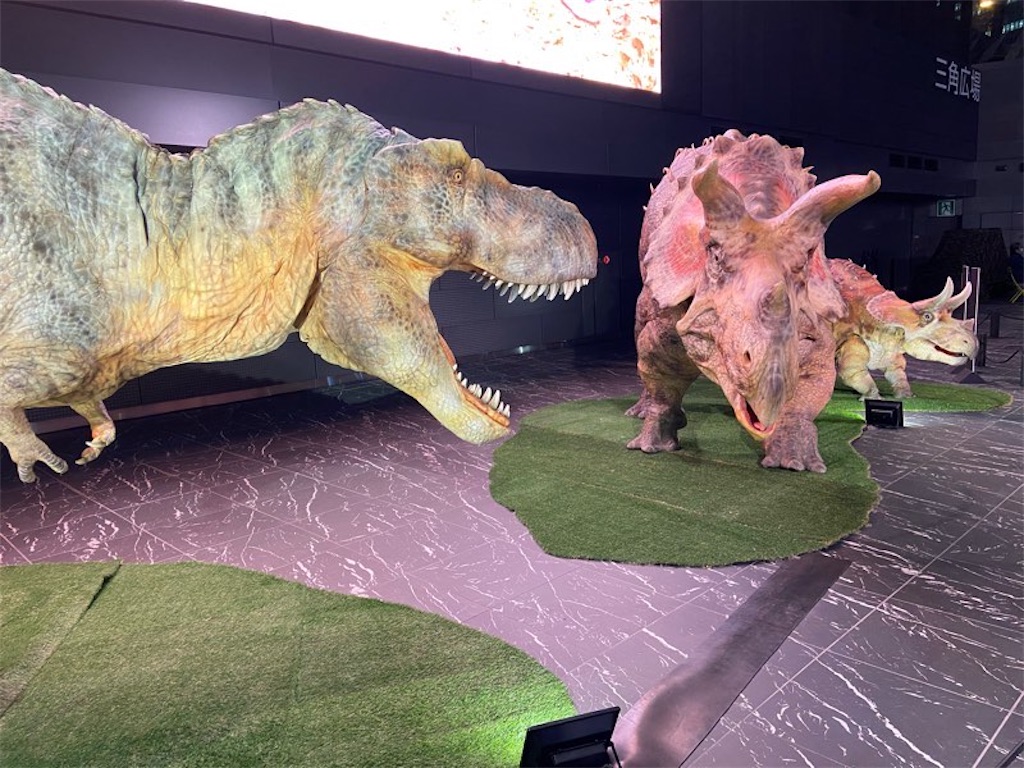 How the Dinasours Move?

I got a lot of questions in Twitter; Is it a robot? Is it computer graphics? Is it a costume?

It is not computer graphics. My husband was almost hit in the face with the Tyrannosaurus tail.

According to the official website, there are two kinds of mechanisms to move the dinasours; the electrical part and the part that uses human movement. The part of human movement, which means the operation of the dinasours, is basically done by one pilot inside. Although often mistaken for a robot, the vast majority of the dinosaur's  movements are controlled by the manpower and maneuvering skills of a single pilot.

Who Made the Dinasours?

The dinosaurs were developed by a Japanese company, ON-ART, with its outstanding technology dinosaur mechanical suit.

This is their official website (only in Japanese language). It's a small company with a few employees, but their goal is to bring their walking dinosaurs to the world.

Mr. Kazuya Kanemaru, a founder of ON-ART, started his project to realize his unique idea that humans manipulate and move large animals that walk on their own two/four feet in 2003. They obtained technology patents in 14 countries such as Japan, U.S., EU, Australia, China, and Korea. The dinosaur mechanical suit is called DINO-TECHNE.

Want to See More Photos/Movies of the Dinosaurs

You should take a look at the official instagram.

Also, you can search Twitter with "#恐竜と撮ろう", which means "let's take photos with dinosaurs".

Can I Buy the Dinosaurs?

No. The dinosaurs are not for sale, according to the official website.

What Kind of Dinosaurs Do They Have?

There are 21 dinosaurs of 8 species as of May 2019, according to the official website. The largest is a Scomimus with a total length of 9 meters. There are also Tyrannosaurus, Triceratops and Stegosaurus. You can see the dinosaur lineup here.

Where/When Can I See the Dinosaurs?

You have to visit Japan to see them; I know COVID-19 is making it very difficult. Very sad.

The Amazing Dinosaurs Art Exhibition is already closed, and next chance to see the walking dinosaurs is to visit 立川 GREEN SPRINGS in Tokyo from December 2020 to August 2021.

In the past, their Tyrannosaurs attended the opening ceremony of the Royal Museum in Kuwait in February 2018. You can see the ceremony in YouTube.

I hope there are other chances for ON-ART to bring their amazing dinosaurs all around the world in the future.

Stay safe, and visit Japan to see the dinosaurs someday!

Read More : My Article on the Amazing Dinosaurs Art Exhibition (in Japanese)

I wrote an article on the exhibition with photos and movies.

Read More : My Other Articles in English

I am a Japanese living in Japan, and I usually write articles only in Japanese.

But here are my other articles written in English, for my English-speaking friends.